Praise heaped on Woman of the Year Elsa Brizzi 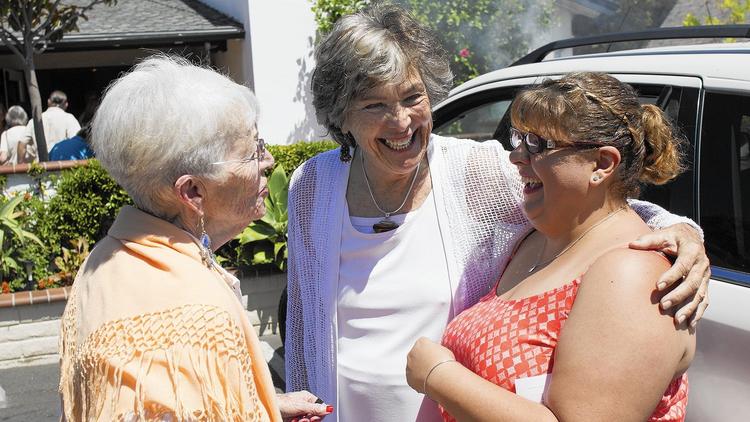 Elsa Brizzi has spent years instilling in children the message of her book, “You Are a Very Special You,” but on Friday she was surrounded by a room full of people saying how much those words apply to her.

Friends and family of Brizzi, a bilingual educator, spoke about the influence she has had on children as she was honored as the Woman’s Club of Laguna Beach’s Woman of the Year.

Brizzi, who was raised in Inglewood by a German-born father and a mother whose parents were of Spanish and Mexican descent, joins a select group of past Woman’s Club honorees that includes environmental preservationist Carolyn Wood, former Laguna Beach Mayor Kathleen Blackburn and musician Carol Reynolds.

Each year since 1995, club members nominate women based on their consistent volunteer service. Members then cast ballots to determine the award recipient.

There was no shortage of endearing qualities used to describe Brizzi. Speakers called her inspiring, creative, big-hearted, inclusive, tenacious, generous and sincere.

“You could charm a snake,” said Jeanine Edmond, program director at the Laguna Beach Community & Susi Q Center, eliciting laughs from the crowd.

Edmond, whose background is in child development, worked with Brizzi on the Intergenerational Literacy Enhancement Program, which links a volunteer mentor from the Susi Q with second-graders at the Boys & Girls Club of Laguna Beach.

Adults and children meet at the club on Laguna Canyon Road once a week after school to read, draw and converse, using “You Are a Very Special You” as a guide. The children are encouraged to feel special by drawing pictures of their lives and talking with their tutors.

The book has been translated into three languages: Spanish, Chinese and Portuguese.

“Just having a caring adult with a child adds so much to their lives,” Edmond said. “Elsa takes complex educational ideas, puts them with love, and creates a program that works.”

Brizzi earned a master’s degree and teaching credential from USC and taught elementary, middle and high schools in Pasadena.

From 1992 until retirement in 2005, Brizzi worked for the Los Angeles County Office of Education’s Head Start division, which promotes school readiness for children who are younger than 5 and from low-income families.

She collaborated with Cerritos College to create a preschool teacher-training program with the aim of helping low-income parents become employed as preschool educators.

Speakers said Brizzi has boundless energy and is never one to shun an idea but rather to look for opportunities to see a thought through.

She also has an artistic side, creating clay sculptures at her Laguna Beach home, and she teaches water aerobics twice a week to seniors in Foothill Ranch.

Brizzi serves on the boards of the Woman’s Club, Laguna Outreach for Community Arts and the American Assn. of University Women’s Laguna Beach chapter.

“You made the day,” Brizzi said to the crowd, flashing a smile that seemed to sparkle as much as her sequined blouse. “Thanks for your laughs, thanks for your tears. I don’t know what to say. I value our community. It’s easy to be collaborative in a community as interested in new thoughts and ideas.”

Kelly Marks, Brizzi’s nephew, had the crowd laughing when describing a time when he and Brizzi were driving to Oregon.

An officer stopped Brizzi for allegedly speeding and asked if she knew how fast she was going. Marks was 4 at the time.

Brizzi’s response, according to Marks: “No, I don’t know. I was having such meaningful conversation.”

“Elsa is the only person that can have meaningful conversation with a 4-year-old,” Marks said. “You immediately feel you have worth” when around her.

KEEP UP TO DATE WITH LOCA!

We publish a bi-monthly newsletter with interesting articles on upcoming classes and exciting events. Sign up to keep up to date with LOCA.